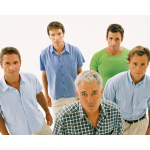 A man  turned up to a workshop complaining of periodic freezing of his jaw and an intermittent inability to speak. In asking his family history his father and mother had escaped from Europe during the war and set up a successful life in Australia.

In setting up his family constellation he set up his parents and himself with representatives. His parents were looking away and he was also looking into the distance. There was a big space between each of them as the centre of the constellation was empty.

In bringing in representatives for the people they left behind in their home country and the victims of atrocities committed by the enemy, a deep grief descended on the room. The constellation proceeded to unfold and express and release emotions and the family members reconnected with each other and their home land.

The man reported a loosening of his jaw and a new sense of freedom and lightness a month later.

He had been affected by systemic trauma. While in his case it was war and atrocities and loss of their home and their inability to speak out, it could also have been a famine or colonisation or being thrown off your land or deep injustice. Alternatively you may descendants of those who have been the perpetrators and have always struggled with feelings of guilt or shame.

Systemic trauma may present itself in many ways. In constellation work it presents as mental health issues, illness, guilt, shame and the worthlessness that is often the underlying driver in substance abuse. This is so for all nations and is pertinent to us here in Australia with our treatment of our indigenous people that continues to hold a deep scar and terrible consequences for many present day descendants.

A systemic approach perfect for systemic trauma. If the issue is caused by a systemic trauma it fades after a constellation as the autonomous nervous system of the client starts to recover as order and dignity is restored in acknowledging the roots of the trauma and those involved. Somehow the energy of it dissipates and frees those in the present from its burden.

To find out more about constellations or book into a workshop, private session or Family Constellations training HERE