How love can become entangled.

A man cam to me with an issue of feeling stuck in terms of his career. He said he had a sense of shame. He was very well educated and accomplished in his field and yet he always missed out on key roles and jobs and was constantly being over looked for promotions. On asking him about his family history he said his forefather was on one of the first fleets to Australia as a convict. This man was eventually freed and was given land to farm and did become successful. In setting up the constellation it was clear that this original man in Australia was not at ease. His original country was set up and the aboriginal people of Australia too. He was very angry wight he injustice he had received from the UK and his representative felt much better in expressing it and then he turned to the indigenous people and felt deep shame. The Aboriginal people were deeply hurt and angry at being displaced and brutalised from their homelands. The representative for the ancestor prostrated himself on the floor before them sobbing and apologising for what and how he had taken the land and for the lives that were lost. He apologised for excluding them from their homelands and taking away their dignity. The representative for the indigenous people stood tall and gave back their sense of shame to him and he in turn gave back what rightly belonged to his home country for the way he was treated too. From this point the representative of the present day man was deeply moved and bowed first to the original peoples of the land and asked for their blessing to do well in this great land. This was given with the message not to forget the original people of Australia. He was then able to face his great ancestor and bow to his destiny and leave it with him with some understanding and respect.

The constellation finished here with the client feeling emotional and relieved and free. He said he felt lighter and optimistic and no longer felt the sense of shame he had always been aware of. He is now doing well in his career and becoming involved in supporting community projects with indigenous people and has expanded his connections across many levels and made some good friends. 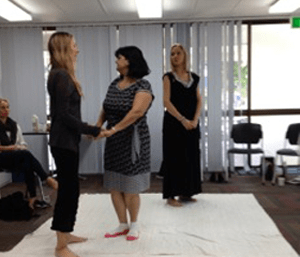